“Bringing the Social City to the Smart City”

For a joint EEO-AGI and Hutton Club Seminar Series, we welcomed Professor Alison Heppenstall, a Professor of GeoComputation at the University of Leeds and an ESRC-Turing fellow. Alison guided us through her new research into the methodology and implementation of big data in understanding human behaviour and its impacts, and how this can be used to create smarter, healthier cities.

By 2050, the UN predicts that 70% of the population will be living in urban areas. In Africa, cities are expanding faster than the infrastructure can be built. It is easy to see that cities will play a crucial role in our future. So, how can big data help? The goal of Alison’s research is to understand the impacts of human behaviour. Particularly, how behaviour changes spatially and temporally, and how it is affected by disruptions.

Our phones monitor our activity 24/7, and with the increased use of smartwatches, our steps, heart rate and location are routinely tracked – even our sleep. Combined with the strong computational power and ability to store huge amounts of data, we can now progress from an aggregate-level analysis to individual. By bringing cities and big data together, we can plan for a smarter, healthier future of our cities and people living in them. Piecing together the who, where and why can reveal the secrets of cities: pollution and crime hotspots, who is being exposed? Where are the popular economic hotspots? How can we develop active cities to encourage healthy citizens? We must look into social data for patterns and clusters across time and space. However, geographers are notorious for handing space-time badly…

Dynamic data assimilation is the process of adding real-time data to predictors and recalibrating to understand the potential decisions (and consequences) of humans. In this process, we can unearth patterns we would not usually see. However, due to the mass of data, we are new to manipulating it and using it to its full potential. But data wrangling from disciplines such as epidemiology can introduce new perspectives on human behaviour, and as we want to see behind the expected patterns (not people going to work at 9 am and returning at 5 pm), we need to think outside the box.

Straight-line flow maps and Bézier curves are all data visualisation techniques. The homogenisation of data can also allow us to identify patterns on national scales. A strong point throughout Alison’s seminar was the importance of good data visualisation, reinforced by the wide range of techniques presented to display her data. However, the bias presented by data visualisation, such as choosing what is or isn’t shown can significantly affect how patterns are found – but Alison says using a suite of data visualisation techniques can help avoid this. Other means of cluster-identification, such as K-means, DBSCAN and degree-node identify clusters or groups and popular routes for reaching places – but what if these groups are more spatially dependent than we realise? What is the spatial context?

Recent research of Alison’s from a Chinese city, Shenzhan, shows that people actively changed their behaviour when a new metro line was built, as two new clusters formed. Can we use big data to predict short-term changes in behaviour to disruptions – such as, how will Londoners change their behaviour with the new Elizabeth line? 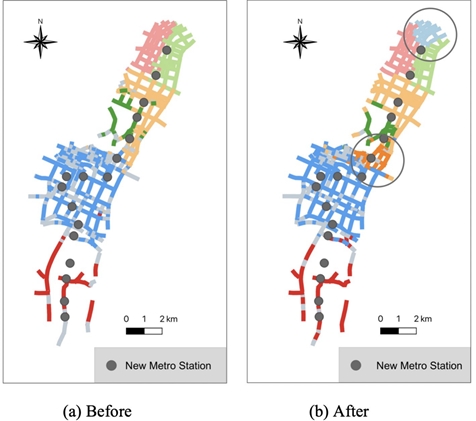 A glaring issue, nonetheless, is present: ethics. The UK has strict safeguarding of our data, and there are several training courses required before you can have access. But is anonymity of data enough? Monitoring where people go, their race or gender and other “anonymous” characteristics other than name or address are still hugely revealing. This raises the question of who can have access to this data, and how much should they be allowed to do with it?

Despite this, machine learning combined with big data gives a unique opportunity to adapt and manipulate social data to reveal unknown patterns in human behaviour on a spatial and temporal scale. With the aim of building better agent-based models, we can add parameters or rules derived from machine learning analyses to provide solutions to help our cities become smarter.